It’s heartening to see more grassroots initiatives to bring conservation messages in channels which are familiar to local communities. This article highlights the troubling fact that fisheries are being depleted by local communities as people see their resources as ‘abundant’ and have a perception that these resources will be ‘provided by God’. Such perceptions give people the idea that their continued ways are justified and they see little need to change their practices and be instead stewards of the resources they have been provided.

It is also great to see how both pastors and scientists in this context are crossing over to different sides – the pastor is pursuing a PhD in natural resource management, and the scientist is using local community faith systems to convey conservation messages – to help support these fishing communities in being better managers of local fisheries.

It is a few days late, but warm wishes from the RCRC on Earth Day!

Some green teachings from the various religions of the world to reflect on.

Indonesia’s top Muslim clerical body, the Indonesian Council of Ulama, has issued a fatwa against illegal hunting and trading of endangered species. A fatwa is an Islamic legal pronouncement, issued by an expert or council on Islamic religious law. This is really good news, considering large areas of Indonesia’s rural population are Muslim and are now encouraged by their religious authorities to protect and conserve endangered species such as the tiger, elephant, orangutan, and rhinos.

For more information as well as a pdf of the fatwa issued, please see National Geographic’s article here.

Firstly, warm wishes for the new year of 2014! The last few months have been very busy for me personally, making the transition from a PhD to an independent researcher. As such, the RCRC blog has been somewhat neglected.

In line with the work I do on smallholder agriculture and addressing the challenges of sustainable agriculture, I came across this initiative called Farming God’s Way, where a Christian group has taken up the initiative of moving farmers out of poverty by improving their management practices in their farmlands. This is the first example I have encountered of a religious group providing aid through managing farmlands and promoting sustainability in agricultural systems. Quite an interesting initiative. To me it seems like the faith aspect draws people together as a farming community, while the aid or development aspect of this group (or ‘ministry’ as commonly used in Christianity) helps propagate good standards of agricultural production within the community. 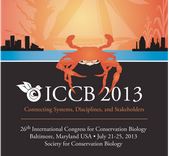 END_OF_DOCUMENT_TOKEN_TO_BE_REPLACED

I have worked in Sumatra for my PhD project and visited many villages in the provinces of Riau, West Sumatra and South Sumatra. Islam plays a central role in the community activities of many of these villages. I certainly believe that community-based management of natural resource has an untapped potential in the religious communities and am very glad to see the Darwin Initiative promoting environmental awareness and understanding through mosques and the leaders of the Muslim community. More so that they conducted this project in a systematic manner and planned surveys to evaluate the impact of their initiative. I did conduct surveys with a handful of religious leaders from the mosques in the villages I stayed in but have yet to analyze the data collected (no excuses now!).

Re-posted here from Alliance of Religions and Conservation

END_OF_DOCUMENT_TOKEN_TO_BE_REPLACED

A very interesting study by Jeffrey Luzar & Jose Fragoso which examines hunting practices of the indigenous people in the Guyananese Amazon.

“The introduction of Christianity has changed the hunting habits of indigenous people in the Amazon. While some new practices could benefit animals, others could put populations at risk.”

END_OF_DOCUMENT_TOKEN_TO_BE_REPLACED

In this series of ‘Getting to know us’, we present the people behind the RCRC group, their motivations and inspirations to bridge the gap between religion and conservation biology.

“Religion has been an intricate part of my life since about the age of eight. As with many people in Africa, it was the social construct with which I used to put my life in context. Growing up in Benin City southwestern Nigeria, my adolescent years coincided with the rapid growth of Pentecostalism in the country. With little or no option available to finding meaning, I embraced Pentecostalism wholeheartedly. I carried this worldview for several years and inadvertently ended up studying Zoology in the University of Ibadan. During these years in the university, the rational side of my mind was taking form and I questioned my beliefs but was too afraid and ignorant to discard them. However, my stretching the boundaries of my beliefs to find reality resulted in triggering an otherwise dormant illness, Schizophrenia.

The traumatic experience paved way to a paradigm shift, a new reality that broadened my vista to exploring self knowledge through the study of philosophy, psychology and wisdom in a variety of religious traditions. I no longer had a parochial view of Pentecostalism. In 2002, during my National Youth Service, I was awarded a Tropical Biology Association (TBA) Scholarship to participate in a field course in tropical ecology and conservation on the East Usambara Mountains in Tanzania. Conservation to me was appealing as it connected with my idealist personality and desire to contribute to society – a new and transcendent spirituality I was beginning to develop. On that mountain in Tanzania, I made my decision to follow the career path conservation biology and TBA helped make it a reality by sponsoring my membership of the Society for Conservation Biology (SCB). I have served as a volunteer in the SCB for a decade working for half of the time in the Africa Section of SCB. In 2007, I met Tom Baugh founding President of the Religion and Conservation Biology Working Group (RCBWG) when he made a call for volunteers to help him build the RCBWG. It was a timely opportunity as I was already nurturing the idea of how religion could play a role in conservation in Africa. So that when I joined the RCBWG as founding board member, I published an editorial in the Conservation Biology Journal titled “The Role of Religion in the HIV/AIDS Intervention in Africa: A Possible Model for Conservation Biology”. In 2012, inspired by Bron Taylor’s 2011 article “Toward a Robust Scientific Investigation of the ‘Religion’ variable in the Quest for Sustainability” published in the Journal for the Study of Religion, Nature and Culture, I helped to create the RCRC in collaboration with a team of dedicated volunteers including Jame Schaefer, Andrew Gosler, Tom Baugh, Janice Lee, Kwek Yan Chong, Eric Landen, LoraKim Joyner, Martin Nganje, Matt Berg, Anke Weisheit and others. The RCRC was created to bridge science with policy within the purview of religion and conservation.”

In this series of ‘Getting to know us’, we present the people behind the RCRC group, their motivations and inspirations to bridge the gap between religion and conservation biology.

“When I first started looking into the issue of religion and conservation, I remember being a graduate student pursuing my Masters in Science under Prof. Navjot Sodhi at the National University of Singapore. Sodhi presented us with a writing exercise: Think about a topic that is controversial and exciting and could be published as a commentary in the journals Nature or Science. I came up with the topic on relating the world’s religion to biodiversity conservation and presented my topic “Keeping the Faith in Conservation” (see the amateurish presentation here). This article never made it to any journal but my time researching and being exposed to the literature behind this idea has kept me interested till now.

To me it made sense. To want people to care about the environment, we need to influence their perceptions, the way they value nature. Even more so in Asia where majority of rural people at the forest frontiers profess a religion or belief system. Ever since that writing exercise, I have grown to be interested in trying to develop this idea within my own religion (I am Catholic) as well as to understand how other religions can be tapped into to promote conservation values. Shonil Bhagwat whom I met at the Association of Tropical Biodiversity and Conservation meeting in Marburg 2009 roped me in as one of the executive members of the Society of Conservation Biology Religion and Conservation Biology Working Group (SCB-RCBWG). Through the SCB-RCBWG, I had the opportunity to meet numerous like-minded individuals, including Stephen Awoyemi who is one of the most passionate individuals I have met so far. Steve saw a need for a more research oriented approach to this topic and spearheaded the development of the Religion and Conservation Research Collaborative (RCRC).

I began this blog in September 2012, naively thinking that I could handle some outreach activities while finishing my PhD. Of course, the blog fell silent for almost 10 months. Now that I have some time and energy, I plan to use this blog as an effective means of communication to the public on research and news that has been conducted in the nexus of religion and conservation biology. I will focus more on communicating research articles published in peer-reviewed journals but will also contribute some posts on interesting news events or research projects.